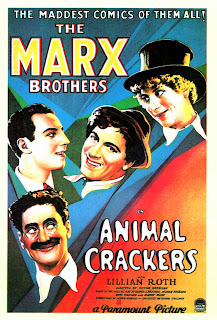 This year we're hosting a mini-Marx Brothers March Break Film Fest at the Mayfair. That is quite a mouthful, it took me a couple of times to get it right when trying to do the Mayfair answering machine message last night.

In past years we've screened whatever the latest kids movies were that were available, ending up with such cinematic classics like Alvin & the Chipmunks and Smurfs. Screening mainstream kids stuff like that is a bit more profitable at times, though not exactly my favourite movies of all time...well, to be fair I didn't watch them. I am going to jump to the assumption that neither of those examples is going to knock Jaws or American Graffiti off of my favourites list.

There were no new Hollywood kids movies available, so we've decided to go with more of a classic family friendly offering for some of this years March Break scheduling. Plus, how could the opportunity of tongue twister pun of a title like Marx Brothers Marx Break (also listed as The Ides of Marx) be passed up?

Posted by batturtle at 9:25 AM