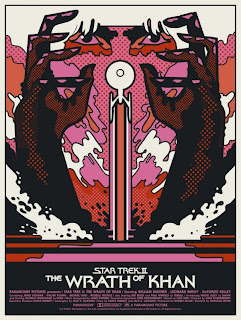 Although numerically they are chapters II, II and IV, the Star Trek films Wrath of Khan, Search for Spock and The Voyage Home have com to be known as the Star Trek motion Picture Trilogy. Unlike all the other self contained plots of the rest of the Star Trek film franchise, this trio of films serve as an over-all beginning, middle and ending of a grande tale. Many Trekkies see the Wrath of Ricardo Montalban's vengeful Khan as the pinnacle of movie Trek's, Search for Spock features death and rebirth (spoiler alert!) and a Klingon Christopher Lloyd, and The Voyage Home has time travel, comedy and whales. There are very few better trilogy sci-fi movie ways to spend an afternoon...maybe just one other way, and we aren't allowed to screen those lightsabre movies.

PS - The awesome Star Trek poster above is from an Alamo Drafthouse screening, as designed by wbyk.com. It's one of those limited edition dealy's though, so if you want one you'll likely have to scour the ebay.
Posted by batturtle at 1:26 PM