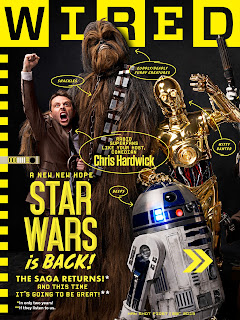 I love Star Wars and the Nerdist so much that I purchased an actual physical paper copy of a magazine! A magazine, for those of you not in the know, is like a blog or a website but the words and pictures are on glossy paper instead of some form of computer screen. This latest issue of Wired features Nerdist mastermind Chris Hardwick and a cover exclaiming that Star Wars is back. I'm always excited by the promise of more Star Wars, but it doesn't seem like it really went anywhere. The Clone Wars animated series is currently on teevee, and there seems to be a never-ending output of Star Wars related comics, book, and video games.

The crux of the article within is about the new hope brought on by the Disney / JJ era of Star Wars that is on our horizon, only a short two or so years from now. There's a bunch of fun pictures and nostalgic articles from various geeky writers and celebrities about their love of Star Wars. Of course some prequel bashing slips in there, including one entry that ends with the writer lamenting and asking if we remember when Star Wars was perfect? Star Wars was of course never perfect. My controversial view about Star Wars over-all is that the original trilogy isn't as amazing as people might think and the prequels aren't as terrible as some think they are. Many of the people who whine about Star Wars now-a-days seem to forget that they saw the original trilogy as children and the newer films as adults. That age gap causes a much skewed perspective on one's entertainment preferences. I used to love Tron...then I saw it as an adult and was very confused as to how I ever could've thought the video game themed movie was amazing.

I look very forward to another round of Star Wars movies, and will avoid the internet comments section because when they trash JJ's directing of them I know it will just piss me off. I prefer to watch and enjoy my Star Wars in a cheering and joyful manner like Chris does on the cover of Wired.
Posted by batturtle at 5:18 PM