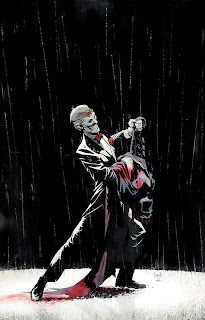 More Bat Spoilers! Got caught up on a bunch of Bat-reading, including Batman #17. This issue featured the conclusion of the latest in the never-ending crossovers between the Bat-family of comics, Death of the Family. This story-arc, as spearheaded by flagship Bat title writer Scott Snyder and artist Greg Capullo, featured the grand return (or introduction of depending on the point of view) of Joker to the New 52 DCU. Snyder and Capullo are in the midst of an impressive run within the shared Batman universe, and this tale brought the whole Bat family (specifically Robin, Red Robin, Red Hood, Nightwing and Batgirl) to the verge of disaster. There were a couple of moments so on the verge of being terrifying in this issue that I thought they were going to bring Joker and the Batman mythos to a darker place than maybe ever visited before. Excellent climactic edge of your seat comic book story-telling throughout the whole issue. Most appreciated is the comic book trend that although an inter-title crossover, you can just read the Batman issues to get the whole story. Meaning that you can read the spin-off books to get further story-points if you'd like, but not necessary if you don't have the finances, interest or time to undertake a bunch of other comics if you don't want to.

I just wish that I had read this issue before reading the much more tragic Batman Inc #8. It was very bitter-sweet to read a story with Damien Wayne / Robin in which he came out slightly more successfully and more alive in the end. Sniff.
Posted by batturtle at 4:14 PM