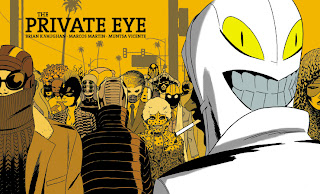 Brian K Vaughan, one of my most favourite of writers, has a new comic book series out titled The Private Eye. Along for the ride, he has the very talented Marcos Martin, who has recently handled artist duties on some great Daredevil and Doctor Strange tales. That is excellent enough news for anyone who enjoys comic books or reading in general.

What makes this comic book release extra interesting is that it is happening solely as a digital download, and the price is up to you. Stuff like this might be seen as bad in terms for the future of comic book stores, seeing as the creators are not only cutting out the middle-man of a publisher, but also of a store. I think comic book shops will be fine in the long run. Even if 100% of the comic book publishers and indies go digital, there's still a lot of action figures and shirts and board games and old comics and countless collectibles that collector's will continue to spend their money on.

How moves like this could effect publisher's is a different matter though. I don't think that Batman or Spider-man are in any danger, but we might see more and more big name talent go the creator owned route vs working for the big guys. Much like musicians going straight to websites to sell their work, they don't need record executives and comic writers and artists may not need to split their profits with publishers. Robert Kirkman makes a lot more money and has a lot more control over The Walking Dead than if it would have been published at Marvel or DC.

Also of interest is that geek culture, whether it be fans of comics or music or movies, are continually proving that there is money to be made in this manner despite the ever looming far of piracy. Stealing stuff online is never going to go away, but it's promising to see that people have the mind-set that if they support what they like, more of it will be made. I'm noticing an ever increasing number of Kickstarter style produced movies successfully making it to the big screen, more bands relying on selling music directly to their fans without a major record label, and more comic book creators stepping away from a desire to work for Marvel or DC.

The first 32 page issue (or a possible 10 issue maxi-series) of The Private Eye is currently available for whatever price you deem fit at panelsyndicate.com

Posted by batturtle at 2:02 PM