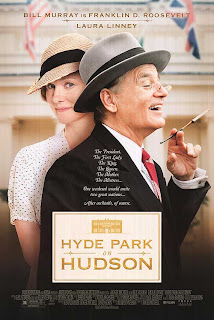 I'm not sure what my first introduction to Bill Murray was, maybe it was his appearances on SCTV, or it might have been watching Meatballs or Caddyshack or Stripes when I was technically much too young to be allowed to view any of those movies according to ratings boards. I know for sure that after seeing Ghostbusters in the theatre when I was a lil' kid, full blown hero worship love kicked in.

In the years to follow I loved Scrooged and What About Bob? and Groundhog Day. I loved the hint that his career might take a different turn when he started taking on roles like in Mad Dog & Glory and Ed Wood and Hamlet. Of course I've loved Bill's ongoing filmmography of work with Jim Jarmush and especially Wes Anderson. I even loved his turn as Bosley in Charlie's Angels.

I especially enjoy that he has a lovely air about him of just not giving a damn. There's a video from last year that circled the interwebs (and screened at the Mayfair's Fake Trailer Fest) where Bill shot a quick slo-mo walking scene with some fans in lieu of signing autographs. He spends his spare time in awesome horrible attire participating in celebrity golf tournaments (and he's good!). His appearances on Letterman are the favourite episodes amidst my favourite show. I don't think he even has an agent or a team handling his career the way most super-stars do. He works who he wants to work with, partakes in media as he wishes, and stays out of the hurricane of the Hollywood eye. I have a Ghostbusters tattoo on my arm, and I think it's just as much a tribute to him specifically as the overall film that I love so much.

So, all that gushing will make it not so shocking to hear that I am quite excited to see Bill's latest film and his portrayal of U.S. President Franklin D Roosevelt. The Mayfair screens Hyde Park on Hudson tonight at 7:00pm, on Saturday March 2nd at 6:00pm and Sunday the 3rd at 7:30pm.
Posted by batturtle at 11:08 AM