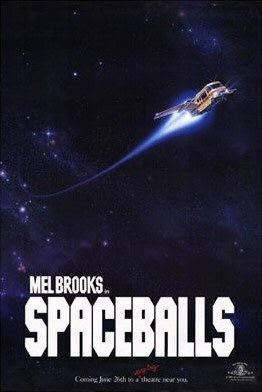 We're screening Mel Brooks' sci-fi spoof Spaceballs this-afternoon and tomorrow night at the Mayfair. For many fans of cinematic comedy, that would be easily enough reason to make a trip out to visit us for some movie watchin'. My favourite part of the film is Rick Moranis' performance, in that era he was in the midst of an incredible comedy run, including of course SCTV, Little Shop of Horrors and Ghostbusters.

At the Mayfair we are known to movie geek things up for our patrons with extra special events as much as possible, ans this will fall under that category. This specific print that we'll be screening is an extremely rare pre-release print, seen by the eyes of very few human beings. This is the nearly complete, but still in a somewhat rough stages print that would have been shown off to studio executives before final approval went through. I'm not a Spaceballs expert, so I might not notice every single little difference, but I know the following: a few parts are in black and white, there are unfinished special effects seen, a temporary music score over portions, and the biggest treasure are a number of scenes never seen on print, TV, VHS, DVD, Blu Ray. Another night of entertainment possible nowhere else on earth but the Mayfair Theatre.