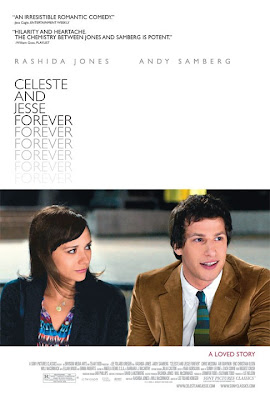 Celeste & Jesse Forever was co-written and co-produced by Rashida Jones, which staggeringly enough means that she has some real talent in film production and writing on top of the awesomeness that she already had just from being actress Rashida Jones as is. The movie hit some heavier notes than I had expected, and at the same time had some of the funniest laugh out loud moments I've seen in a film all year. Although, even with her character as the one causing trouble and being a bit unsympathetic in certain moments of the film, you none-the-less have to make the unlikely to be realistic and mighty suspension of disbelief leap that someone would want to divorce Rashida Jones.

Celeste & Jesse Forever - last night to catch it on the big screen - Sunday November 18th at 6:30pm at the Mayfair Theatre
Posted by batturtle at 6:08 PM