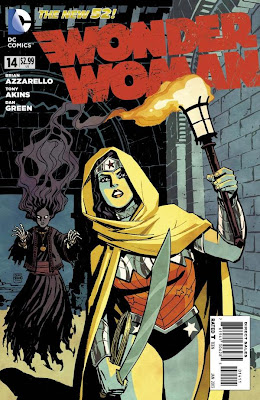 There's been a long running rumour in comic book circles that if Wonder Woman were not Wonder Woman, her comic book series would have been cancelled ages ago. Evidently the only thing that keeps her solo monthly series going is that her likeness and logo sell a lot of clothing, shoes, wallets, make-up, and other such pop-culture tie-in merchandise. This sounds crazy that such an icon can't actually sell any books, but I have heard from reliable comic book professional sources that this is indeed fact.

It's a shame if this is indeed true, because Wonder Woman comics have been good not only of late but for years (even decades). The current New 52 reboot of Diana of Themyscira comes from the Harvey and Eisner award winning writer of 100 Bullets, Brian Azzerello and Green Arrow/Black Canary artist Cliff Chang (though he just supplied the cover of the latest issue).

This latest incarnation features a heavy mythological tone with all sorts of historically known gods and monsters, and also much more of a horror theme. Best of all is that the series is completely self-contained, no need to pick up a dozen other books to be able to know what the hell is going on.

The first volume of the New 52 Wonder Wonder Woman is currently available, and volume 2 comes out early in 2013, issue 14 is currently on the comic book shelves. It's a highly recommended series, and reading an actual comic book will make you even cooler than just having a Wonder Woman t-shirt on.
Posted by batturtle at 4:39 PM