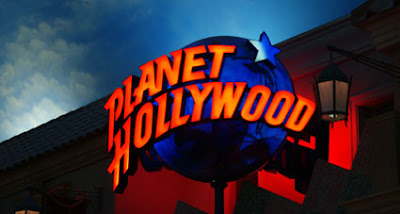 We found a great lil' vegan place called Red Velvet, hiding in a mall nearby to our hotel. I had a delicious wrap and salad and we contained ourselves to walking away with only one giant delicious dessert in tow.

We visited the local roller derby shop, the Viva Las Vegas Skate Company, because we are too late in the season to catch a bout and derby folks love acquiring derby shirts from foreign lands. We hit a bunch of Vegas landmarks and touristy spots like the exterior of the Bellagio where Clooney and the Ocean's 11 gang stood, and the flamingo's and ridiculously enormous coy fish at the Flamingo.

We also spotted some pretty great local flare like an amazing seeing eye dog valiently guiding his master through the insane streets of Vegas. Equally impressive, though much funnier, was a tough as nails bus employee seemingly whose job it is to make sure drunks don't die.

When in Vegas there are a number of fun yet cliché things to do while you visit, mayhaps at the top of that list is going to a burlesque show. We went to one from the talented ladies at X Burlesque, and I just might believe their claims that it is the best burlesque show on the planet. Yes, I fully admit that I enjoy mostly naked beautiful ladies as much as the next fella, but their dancing skills were truly astounding. It was a very impressive show.

Before the burlesque, we went for dinner at Planet Hollywood. A pretty touristy restaurant chain I know, but it's probably not too much of a surprise that I never get tired of looking at movie memorabilia. As you enter the restaurant, you are greeted by a trio wardrobe collections from Expendables 2, Chuck Norris, Sylvester Stallone and Jean Claude Van Damme (which is the jacket that I wanted to steal). Overhead there was an X-Wing, a Tie-Fighter and the Enterprise. My favourite thing about the place is how amazing pieces of motion picture history are displayed alongside left-over crap from garbage movies that no-one would ever care about preserving. For example: Princess Leia's gun from Empire Strikes Back, a pair of boxing gloves from Raging Bull, and the axe from The Shining...alongside a dress that Paris Hilton wore in some movie. Example 2: The ankle bustin' hammer from Misery, gold bars from Diamonds are Forever, and the frickin' Maltese Falcon!...alongside something Lindsay Lohan wore in a stripper movie.