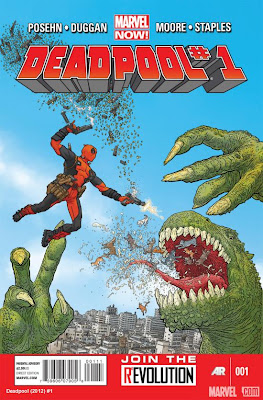 I cannot tell a lie...Deadpool is my guilty comic book pleasure. It's even more peculiar since the character initially came from that sub-par comic book artistry of Rob Liefeld, my least favourite comic book creator of all time.

In the years since then, many more a talented writer and artist have worked on the character, and he's built up an impressive library of stories from the like of Joe Kelly, Ed McGuinnes, Fred Van Lente, Jason Pearson, Kyle Baker and more. The latest in a long line of first Deadpool issues comes from writers Gerry Duggan and Brian Posehn (whom I'm a big fan of thanks to The Sarah Silverman Program and other comedic endeavours). The art is from Tony Moore (whose diverse resume includes the initial Walking Dead and the Punisher's wonderfully bizarre Franken-Castle storyline), with covers from the legendarily detailed Hard Boiled artist Geof Darrow.

Deadpool is notoriously overused throughout the Marvel Universe, almost as much as Wolverine is. He also appears in other forms of cash-grab bits of geeky pop-culture like video games and he's in a horrible Wolverine movie, and you will gain much more hipster comic book cool-kid cred if you say you like something a little more Warren Ellis or Alan Moore-y. Yet, there's something about the 4th wall breaking, guns-a-blazing, gallows humour heavy, bright-red costumed Canadian mercenary that I just can't get enough of.
Posted by batturtle at 2:28 PM