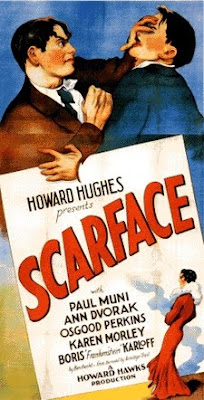 Join our special guest Thom Ernst, host of Saturday Night at the Movies, for the Mayfair's 80th birthday celebration. I've had the pleasure of meeting Thom when he previously dropped by the Mayfair, he's an esteemed cinema geek and historian, and a worthy host in the shadow of the late great Elwy Yost.

Be sure to be on hand this weekend for a truly rare cinematic event. Not every day does one have the chance to see an 80 year old film (actually screened on film!) in an 80 year old one-screen repertory theatre. We will be screening the infamous 80 year old black & white gangster classic Scarface, directed by Howard Hawks and produced by Howard Hughes.

This weekend you have the a chance to win a private screening (where you can watch a 35mm film from our library, bring your own favourite blu ray, DVD or VHS movie, or play video games!), and you can also bid on great silent auction items. Plus we have Kichesippi beer on tap & there will be birthday cake on Sunday too!

We will also be able to make a special official announcement in regards to our ongoing fundraising marathon that has been going on throughout 2012, I will refrain from mentioning anything else just yet as to avoid spoilers.

Scarface - Saturday December 1st at 6:30pm and Sunday December 2nd at 8:15pm at the Mayfair

Posted by batturtle at 4:18 PM