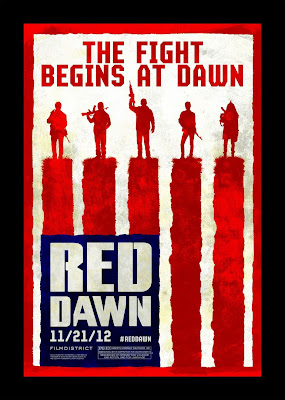 I rarely venture out of the Mayfair for my movie watching, because I am thrifty and there is no better place to enjoy a movie than the Mayfair...I also tend to get rather snobby at the often sub-par multiplex cinematic experience. On occasion I'll get free passes to preview screenings though, and if I have a free night and I've seen the Mayfair offerings of the night, that is sometime enough to get me to venture behind competitor's borders.

I wish that I hadn't of gotten free passes to see the Red Dawn re-make, and that I wasn't movie geek curious enough to see anything and everything. I didn't think the movie would be all that good, it's source material isn't exactly perfection in itself, but it was just a train-wreck of horribleness. I give a pass to Chris Hemsworth and Jeffrey Dean Morgan, because I like them and they have proven their acting ability elsewhere, everyone else involved should be ashamed in themselves. The film was directed by Dan Bradley, a veteran stunt-guy and 2nd unit director, and this proves that skill and experience in one film profession does not necessarily equate success when jumping over to another job title.

It's a shame, because I have no ill-will towards the ongoing trend of remakes and adaptations and sequels in Hollywood, and this will become the new go-to example that Hollywood is out of ideas. This was one of the movies that sat on a shelf for a couple of years due to MGM's financial troubles, too bad it couldn't have stayed there.
Posted by batturtle at 1:21 PM