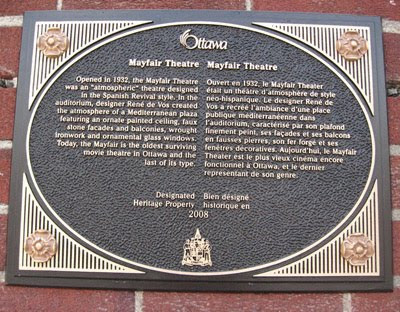 I was going to excitedly post a blog update about the ongoing Mayfair fundraiser which is going on so we can get a fancy new digital projector and keep screening new movies and stay in business. The post was going to be about how ecstatic I was that over-night we had surpassed our $15,000 indiegogo goal, with a whopping $15,025 raised. Now my post can be filled with even more joy gained from the miraculous and gracious charitable outpouring from our Mayfair patrons, because in the last couple of hours we have reached an incredible $17,785!

Everything raised via indiegogo between $15,000 - $20,000 goes towards other projector bells and whistles, everything over $20,000 raised via the site will be donated towards the Canadian Red Cross. The good-will and kind words send towards the Mayfair during this time has been overwhelming to say the least. I'm glad the Mayfair is just as important to so many other folks as it is to me, and pleased that most are approving of the job we're doing with her. This turn of events makes the future much less stressful, stay tuned as the fundraiser approaches it's grand finale on December 2nd with our 80th birthday.
Posted by batturtle at 3:54 PM