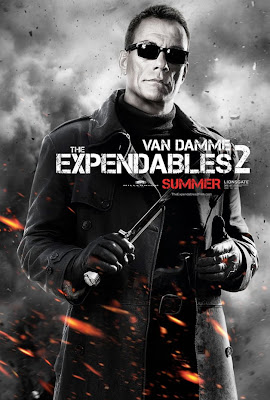 I liked the original Expendables film. It was good over-the-hill action, fun seeing all of these icons and semi-icons on the screen together blowing stuff up, but it all left me neutral as the credits rolled.

Cut to a couple of years later, and due to the films financial success, the inevitable sequel was produced. Sylvester Stallone remained on-board the second time around as star and a screenwriter, but stepped away from the director chair with Simon West (Con Air) taking over the gig. Another point of interest was the promise of slightly bigger roles for first movie cameo appearance stars Bruce Willis and now non-politician Arnold Schwarzenegger. All of the Expendable mercenary soldiers return, along with the addition of upcoming action hero Scott Adkins, Thor's lil' brother Liam Hemsworth, and the addition of another senior statesman of action, Chuck Norris.

For me, the real excitement to see this movie is that Jean Claude Van Damme came to his senses and joined the cast. Evidently he was offered up a role in the original and for some reason he passed on the opportunity to be in what had a chance to be a big hit movie...I can't imagine that he had a more promising gig to keep him occupied instead.

The best part of all is that he's the bad guy, his characters name is Jean Vilain, and he has a fight with none other than Sylvester Stallone. I'm sure there is lots of other guns-a-blazing, explosion filled, bad guy killing action...but what could possibly be more awesome than Stallone vs Van Damme. I think we're in an age of never-say-never in cinema, and in my youth I never would have imagined such a battle ever actually being filmed and put into a movie. On top of that I think there's a scene where Willis and Schwarzenegger drive around in a tiny car shooting stuff.

We've been screening the trailer at the Mayfair, and it has me genuinely excited to see it. I don't know if Expendables 2 will be a good movie, but I can pretty much guarantee that it will be a kick-ass awesome movie. I will be cheering for JCVD to defeat those pesky Expendables.

Posted by batturtle at 4:52 PM