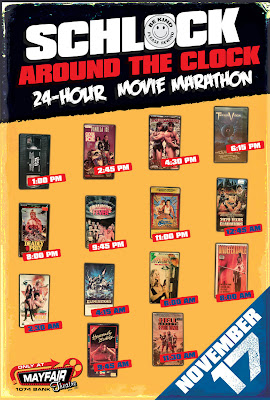 Tomorrow is not only a chance for you to charitably support our ongoing digital projection fundraiser, it's also a cinematic experience that you can partake in few other places on our planet than the Mayfair Theatre.

Schlock Around the Clock: The 24 Hour Trash Film Festival gets under-way at 1:00pm on Saturday November 17th, and the dissent into madness will conclude (as the title suggests) a whopping 24 hours later on early Sunday afternoon.

The marathon of 14 wonderfully horrendous motion picture masterpieces being presented in glorious VHS are: To Catch a Yeti, Cool As Ice, The Barbarians, TerrorVision, Deadly Prey, Film House Fever, The Perils of Gwendoline in the Land of Yik Yak, 2020 Texas Gladiators, Enemy Gold, Eliminators, Skyscraper, Undefeatable, Heavenly Bodies and Hell Comes to Frogtown (trailers all available via the link above).

The word hero gets thrown around a lot, but if you attend, watch and survive this
from-a-seated-position marathon, you are truly a hero that will be worshipped and admired for the ages.
Posted by batturtle at 5:44 PM