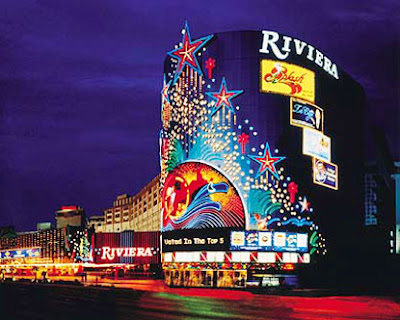 Had a safe and uneventful flight to Vegas, with a brief lunch-time stop-over in Newark, spent most of the travels getting caught up on reading comics. We are staying at the Riviera, and because I am a giant geek, the first thing that I wanted to know was what films shot there. Ends up that it has a pretty historic track record as a film location, hosting films such as Diamonds are Forever, Casino, Austin Powers, and the original Ocean's Eleven.

All of the hotel staff and bus drivers and waiters are the utmost of professionals, have seemingly have a genuine sense of enjoying their job and workplace. Though my first instinct is that it is going to be a nice and worthwhile place to vacation, there is also easily spotted evidence that this place also crushes hopes and dreams via the whole gambling thing. There is also a sense of being transported back in time to an era when everyone smoked cigarettes. It's such a bizarre thing to see being done by dozens if not hundreds of people inside a building, you practically feel that you have stepped into a Twilight Zone of a plot twist.

On our first night in the city, we managed to fit in a very Vegas happening of dinner and a stand-up show. I wish I had written down the comedians names, they were both very funny. The show located in a cosy hotel located club featured a proud and loud Sarah Silverman-esque 40 year old woman, and a silver-haired veteran insult the audience Don Rickles type pro.

I was naive to the fact that along with all other forms of tie-ins and merchandising that cross-over to everything in our world, there are also pop-culture themed gambling machines. We played a Jaws game, and a very impressive Christopher Reeve Superman game featuring movie clips, audio and the rousing John Williams score. It was the perfect game for nerds and children alike, and we walked away with an impressive $10 profit.
Posted by batturtle at 11:59 PM