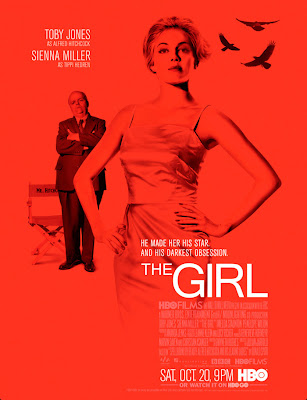 Watched the HBO film The Girl. It was ok, but I can't help but think it's just the Snakes on a Train version of a behind-the-scene's filmmaking biography, which will likely be told better in upcoming Hitchcock starring Anthony Hopkins (even though this one was about The Birds and the next one is about Psycho). Toby Jones plays Hitchcock in the tv movie, in the shadow of Anthony Hopkins portraying the icon just in time for Oscar season. Interesting since he played Truman Capote as well, in the shadow of Philip Seymour Hoffman's Oscar winning performance of the same bio-pic role.

The real stand out though is Sienna Miller in her portrayal of Tippi Hedren, up and coming model turned actress and Hitchcock's mental punching bag. I was only familiar with her work in the Alfie remake, and gaining love and admiration from geeks for if not the GI Joe movie, at least for her Baroness poster from the movie. She does a great job as the only person gutsy enough to stand up to the director's insanity, and her film within a film moments are even more impressive if you are familiar with The Birds and Marnie.

The Girl is alright, but if looking for a truly memorable movie about Hitchcock, you're likely fine to wait for the next version.
Posted by batturtle at 4:46 PM