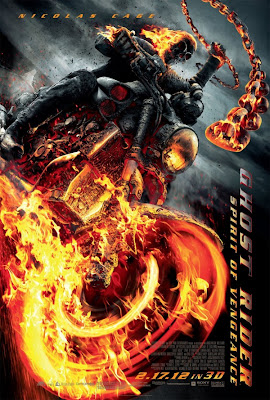 Shockingly enough, Ghost Rider: Spirit of Vengeance is a terrible movie. I wouldn't go so far as to say something like that it's so bad it makes the original Ghost Rider film look good. Both the original and sequel demonic comic book based motion pictures are just terrible.

You wouldn't know this based on any cinematic evidence in the last six or seven years, but once upon a time Nic Cage was a respected and acclaimed actor. Every actor has bad choices or films that didn't quite come together on their filmography, but Nic Cage has been on an impressively terrible marathon of late. If you start with National Treasure in 2004, which to be fair was a giant financial success, and look at his tack record from there it's amazing what he's accomplished in the quality of his movies.

Nic Cage has managed to star in a body of work that includes Wicker Man, Next, National Treasure 2, Bangkok Dangerous, Knowing, G-Force, Season of the Witch, Drive Angry, and Trespass...and that's just since 2006. Not only are they all bad movies, most of them didn't make any money either. And yet Nice Cage bravely soldiers on to the next awful script and the next pay-cheque.

Ghost Rider: Spirit of Vengeance was directed by the hack duo that go by the combined surname moniker of Neveldine & Taylor. They are a lot like Nic Cage in their directorial track-record, except that they have directed four movies, all of them pretty horrendous: a pair of Crank films, Gamer and this one. There is some hope that after a fourth film of equal merit, that maybe that they would just give up and move on to a different career that they might be a bit better at. I have a feeling that they will be back soon with another train-wreck. The funny thing is that Ghost Rider isn't exactly high-brow, sophisticated, complicated source material. It's a 1970's comic book about a stunt man on a motorbike who becomes a demon with a flaming skull who fights bad guys. Yet they still screw up something that awesome! Shameful.

Good news for me is that one of my best friend recently moved back to town. Bad news for me is that he is a friend with the same habit of watching movies that are knowingly awful. Then we enable each other, even though we know the pain that will follow, and go out of our way to watch bad movies. It is a horrible addiction. That means even though I know better, I will likely be back sooner or later with my thoughts on such high quality motion pictures as Battleship, Cool As Ice or Abraham Lincoln vs Zombies.