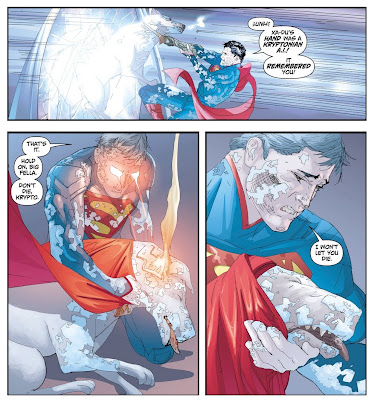 Grant Morrison's Action Comics #13 is another prime example of the powerful storytelling ability possible in mainstream super-hero comics when in the right hands. Excellent super-hero comics are few and far in-between, about the same odd's as excellent network television or Hollywood movies. Luckily, for the time being at least, Grant is hanging around the DC Universe; meaning we get some great Superman and Batman stories for the next few months at least.

Especially if you like dogs, Action Comics #13 will likely emotionally wreck you a little more than your average guys in spandex punching each other in face epic. If you don't like dogs, there is something wrong with you, and it probably means that you don't like comics or other things that bring joy to one's life either. Well, then maybe you don't deserve to read Action Comics #13! Go read a math text book or something.
Posted by batturtle at 4:11 PM