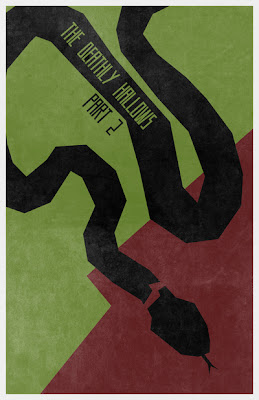 Late to the game on viewing these of course, but finally watched the last two movies based on the final novel in the Harry Potter series, The Deathly Hallows. I am not what you might call a super-fan of the series, I've only read the first book and it didn't entice me enough to continue along with the series. With a few exceptions I'm just not into the swords and sorcery genre most of the time, I could hardly get through the Lord of the Rings even. I have seen all of the Harry Potter movies, but that is just thanks to free passes, friends who had the DVD's, and Mayfair screenings. There are holes and bits of non-worshipfulness in every geeks basket of obsessions, and Harry Potter is just outside of my wheel-house of interest.

None-the-less, I think that all of the films are well crafted and filled with an impressive cache of actors and a talented behind the scenes crew who have cobbled together an impressive eight decent movies in a row that the fan base seemed to adore. My issue with the films is that they seem to be for the fans without an interest in shaping them to be enjoyed as equally by someone who has never read the book.

Every single movie in the series just feels like it's missing giant pieces of important story, and even characters. I know this as a fact actually, having seen Craig Ferguson rant about it on his show. I understand that some of the books were pretty enormous, but that's not excuse to have a script cobbled together that leaves a portion of the audience feeling like they've just watched a movie with whole scenes missing from it. The Harry Potter movies always seem like their sprinting to catch up with their 2.5 hour running time, and in doing so they have to leave giant portions of their story left out.

Maybe in retrospect they realize it might have been a better idea to split up more of their movies into two parts the way they did with their finale. I can't help but look at Scott Pilgrim vs the World as a film that handled this predicament of a source material with too many pages to fit into two hours much more successfully. The six Scott Pilgrim comic books when combined tally in somewhere around a whopping 1100 pages. Yet, Edgar Wright and company managed to whittle that page count to an excellent and completely followable 2 hour movie. To be fair, it tanked at the box office and Harry Potter did not...so in this case I might fall under the umbrella of annoyed guy uselessly screaming into a thunderstorm.

Plus, it's not like any of my critiques matter in the aftermath of a film franchise that its fans gushed over, was nominated for and won a stack of awards, and made over seven billion dollars worldwide in box office ticket sales alone. Those witchcraft loving nerds were quite content with what was dished out to them I guess.