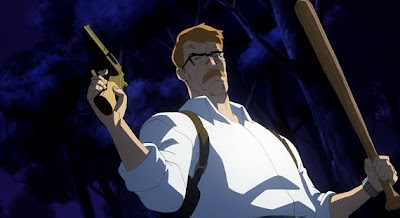 Re-watched Batman: Year One, this time with audio commentary accompanying the viewing. The latest DTV film (which means direct to video...which doesn't quite fit as a title for these things anymore) is yet another great cartoon and story from the Warner Bros animation division. Even in this golden age of comic books being adapted into film and television entertainment, I think that DC's animation output has put most everything else to shame. My only wish with the series is that they were released theatrically first, seeing a movie like Year One on the big screen would be a great sight to see for comic geeks and cinema goers alike. Best of all, amongst other reasons that they are worth watching, in the DC animation world Batman doesn't sound like cookie monster and Green Lantern is played by Nathan Fillion. Doesn't that world sound like a better place?
Posted by batturtle at 11:37 PM