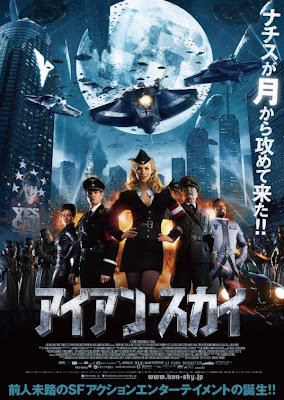 The plot of Iron Sky involves a group of bumbling space Nazi's not familiar with the state of the Earth in the near future of 2018, and the massive invasion they undertake after having lived on the moon since World War II. If you look at the posters, or have read up on the film and know that it had a budget of under $10 million, you might easily imagine up a pre-conceived notion of what kind of movie that this is. You would be right if you were thinking that this was low budget indie comedic science fiction. And that usually movies with those factors mixed in together aren't much better than horrible Snakes on a Train calibre knock off's that you find in the discount bins.

I thought that the movie would fall under the classification of so bad that it is good. Here was the surprising turn of events though, the movie isn't so bad that it's good... it's just plain old fashioned good. The film is still a curious beast though. It's not quite the serious / comedic take on a genre the style of something like Shaun of the Dead, but it also isn't a straight up sci-fi spoof the way Spaceballs was. It falls somewhere in the middle, there's gratuitous moments of our central hot Nazi woman losing her clothes, but there is also some very smart political jabs.

It also doesn't look like a movie that was made for under $10 million bucks. Yes, I hate thinking of $10 million dollars as "only"...but considering romantic comedies are made for five times that, it's quite impressive. The production design and imaginative special effects make the film look like a much more expensive undertaking.

If you enjoy B movies or sci-fi or a good laugh at the expense of those pesky Nazi's, do come out and see this impressive lil ambitious and weird movie at the Mayfair: