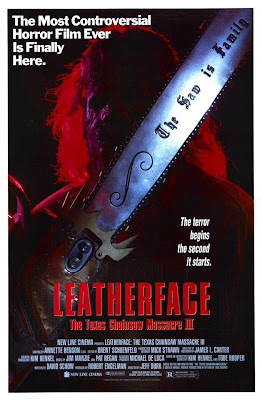 Leatherface takes claim on it's poster that it is "The Most Controversial Horror Film Ever". That's quite a heady statement to make, especially in a world in which various slasher, cannibal and revenge grindhouse movies exist. They wrote this on their poster because the sequel was the final horror film threatened with an X before the NC-17 rating was instigated.

The film stars geek genre veteran Ken Foree...go look at his imdb page, he's been in everything from Dawn of the Dead to X-Files to Devil's Rejects. Although I'm sure he'd rather you neglected this part of his resume, TCMIII also features future Oscar nominee, Lord of the Rings icon and David Cronenberg mainstay, Viggo Mortensen. And of course this cinematic treasure also features a really big scary guy with a chainsaw killing people.

Posted by batturtle at 3:59 PM