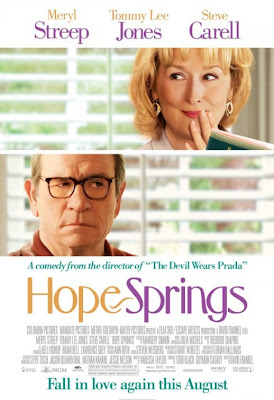 Admittedly, although I do genuinely enjoy all forms of cinema, my tastes do lean towards genres featuring super-hero's and zombies and spaceships. Even though complex special effects, dangerous exciting stunts, beautiful cinematography of epic surroundings, and an unforgettable orchestral score can all puzzle-piece together to help make a great motion picture, sometimes you don't need any of that. Sometimes the simplicity of sticking three impressively skilled actors in a room together is all of the movie magic that you need.

Hope Springs, from the Oscar winning director of The Devil Wears Prada, is nothing ground-breaking in terms of a cinematic history. There are no breakthroughs in technology used in the films production, I'm pretty sure that none of the actors had to research their roles in any form of method style, and it's unlikely that any-one had any Christian Bale calibre nervous breakdowns on set. Hope Springs is a nice, calm, memorable little character piece about a pair of characters who have been together for over three decades who visit a marriage councillor.

The films simplicity does not equate to it being unimpressive or unenjoyable by any means, just the opposite in fact. There are numerous moments between Meryl Streep and Tommy Lee Jones that easily prove that they are deserved in praise of being two of the best actors on the planet. Steve Carrel's supporting role as the marriage councillor proves that unlike other comedian turned diverse actor's out there, he can actually adapt into different roles. He never breaks character, attempts to get a laugh, and never lets Steve Carrel peek through the character. Carell's skillful turn here again proves that he has some real diverse acting chops, the same can't be said for the likes others who attempt the same back-n-fourth career like a Jim Carrey.

Hope Spring's screens tonight at 7pm at the Mayfair, with follow-up screenings on the weekend and Tuesday, ending on Thursday the 11th. Even though there are no millionaires in flying robot armour or climactic battles against monsters or amazing spellbinding computer animation, it is shockingly enough none the less a very impressive motion picture.