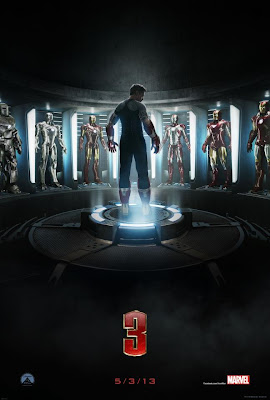 I don't want to alarm anybody, but mainstream Hollywood seems to have actually produced an awesome movie poster. If you look at the evidence put forward in such posters such as The Avenegers, X-Men: First Class, or the Transformers movies, to name a few from the countless many, I thought that maybe Hollywood had actually lost a dare and had to produce only terrible one-sheets. Almost everything made in the past decade or so seems to make use of junior high levels of skill at photoshop, and looks like it was produced in about 15 or 20 minutes by someone distracted with another chore. Good job whoever did the Iron Man 3 poster, it's not quite a Drew Struzan painting, but a very fine bit of effort none-the-less.
Posted by batturtle at 5:12 PM