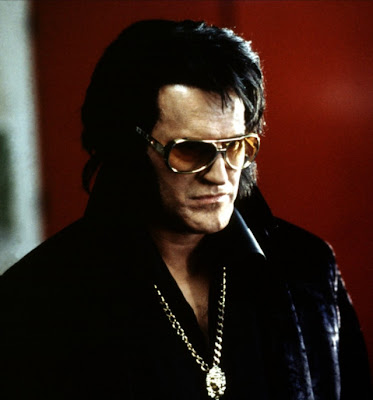 Bubba Ho-Tep celebrates it's 10th anniversary this year, which makes me feel old. If Bubba Ho-Tep is a decade old that means that Army of Darkness is even older than that, and I remember going to see the one in the theatre when it came out as well.

A movie from Don Coscarelli (director of other legendary genre films such as the quartet of Phantasm films) and Joe R Lansdale (an amazing award winning writer of a diverse batch of books, comics and scripts) is promising with those two factors alone before knowing anything about the plot or who's in it. If told that it's about two old guys in a retirement home who may or may not be Elvis and JFK and their battle with a Mummy who's stealing elderly souls, that makes the prospect of the film being great even more likely. If then told that B-movie King Bruce Campbell is playing Elvis and that legendary acclaimed actor Ossie Davis is playing JFK, well...pretty sure that there's no way that this movie can't be anything but awesome.

And the movie was awesome indeed. I fully admit that I'm a bit biased, like many a geek I grew up worshipping everything and anything that Bruce Campbell did. Bubba Ho-Tep is something more that your average low-budget monster movie though. It's not the kind of trash that should be relegated to cheap DVD bins of middle of the night cable tv. The movie has a great smart script, a couple of brilliant performances, and besides for all the humour and scare, it also has a lot of heart & soul.

Kick off the Halloween movie watching season and help us celebrate the 10th anniversary of this now cult-classic film with us at the Mayfair: