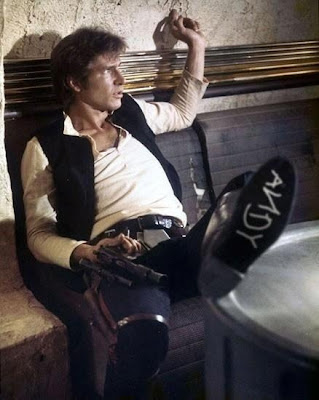 Every other geek on the internet is talking about the exact same thing today, Disney has bought Lucasfilm and hence there are more Star Wars film on our horizon. I'm sure that you can go to countless other websites featuring folks of actual journalistic skill to learn about the importance of the event and facts and money matters and consequences.

When I read the headline "Disney Buys Lucasfilm For $4 Billion! STAR WARS EPISODE VII Scheduled For 2015 Release!" over on the exclamation point loving Ain't It Cool News, my first thought that it was some kind of April's Fools prank. That was genuinely the initial thought to pop up in my brain, I of course then realized that it was October 30th, a date not usually associated with online pranks.

Some folks seemed to think that I would be upset at the idea of Disney taking over the Lucasfilm and Star Wars reigns. That couldn't be further from the truth, yesterday I lived in a world with no new Star Wars movies to watch in my future, and now there will be at least one more trilogy produced. And they will be produced by Kathleen Kennedy, who has a long and successful resume working alongside none other than George Lucas' best friend Steven Spielberg.

I'm also far removed from the angry anonymous internet nerds who are happy that George has passed along the torch to allow other filmmakers to play in the Star Wars sandbox. I enjoyed the prequels just fine, anyone who thinks that they are the worst things ever made in motion picture history clearly haven't seen enough movies, especially say anything with giant robots as directed by Michael Bay. My controversial stance is that the original Star Wars films aren't as perfect as you think they are, and the prequels aren't as horrible as you think they are. They are all just fun sci-fi serial matinee calibre escapism, and if you take them too seriously or put them too high up on a pedestal, you are missing the point of the series. You also need to get out more if disliking a movie gets you that upset. I hated Batman and Robin, but I didn't devote my life to telling everyone how much I hated it. I hated and moved on. Star Trek V was not what one would call a great movie, but I'm not going to spend all my days hating William Shatner for directing it. I'm going to look on the bright side and remember that Star Trek VI came out after it and it was great.

There also seems to be much teasing over the concept that Star Wars will now be Disney-fied, and that that is a bad thing. I remind people that Muppets has treated very well since becoming part of the Disney family, as was Marvel, and they've maintained a great relationship with Pixar for ages.

There will be a new Star Wars movie in theatres in two and a half years or so, and that makes me a very excited geek indeed.

Posted by batturtle at 4:47 PM