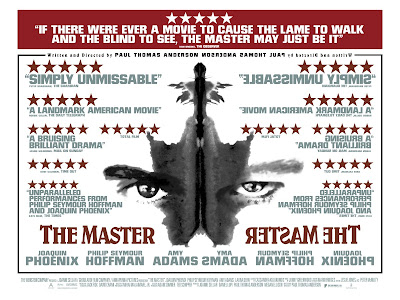 The Master is one of those completely polarizing kind of movies. A good friend of mine thought it was completely boring, I thought it was intense and I was completely enthralled. I admit that I walked into this as a giant fan of PT Anderson's work (Boogie Nights, Magnolia, Punch-Drunk Love, There Will Be Blood) and that I can get lost in a long slow movie in a positive like manner. Whereas I think it's safe to say my friend would give The Master a failing grade, I would easily put it on my list of the best films of 2012.

A Mayfair patron made a similarly negative remark about the movie on Twitter, coincidentally right at the same time another patron gushed in an opposite positive manner on the same topic. I think that the good or bad aspects of a film are subjective and not objective in nature, a point of topic that some disagree with me about. I can love a film that others hate, or I can hate a film that others love...and there's nothing wrong with that. I will always remember that the Ottawa Citizen gave Army of Darkness it's lowest possible rating, while I think it is pretty much a perfect movie-going experience. I pretty much despised Avatar, and clearly I am in the great minority in that opinion since it just happens to be the most financially successful motion picture ever produced.

See which side of the fence you fall in on your Master opinion, check out The Master tonight at 9:15pm at The Mayfair (and if you can't make it tonight it plays the next three days too!). It's ok if you don't like it, I respect your opinion and we can still be friends. If you don't like Army of Darkness...I don't know, that might be a different story.
Posted by batturtle at 11:46 AM