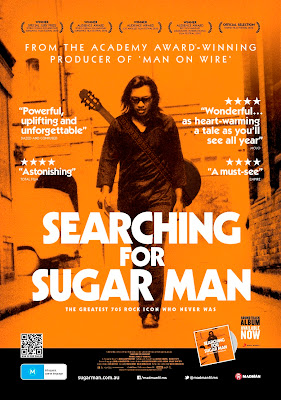 It's a cliché to say that truth is stranger than fiction, but there seems to be a parade of documentary films released in the past few years that easily show that to be a fact. The latest in the line of great stories that would seem unbelievable if told in scripted fictional film form is Searching for Sugarman. The rock doc focuses on the story of a genius early 1970's singer songwriter who never gained success and disappeared into strange never quite proven tales of on-stage suicide via handgun or setting himself ablaze. What starts as the story of a should-have-been Bob Dylan calibre performer who never made it, becomes a fascinating mystery with an unexpected twist. Plus, there is the added bonus of the whole film being filled with some unbelievable music that if you haven't heard before, you will be a fan of afterwards.

Searching for Sugarman begins tonight (Friday December 7) at the Mayfair, followed by screenings on December 8, 9, 12 & 13).
Posted by batturtle at 11:03 AM