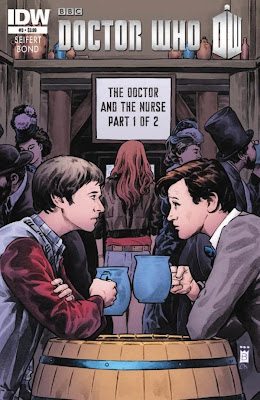 Got my latest comic book pull-list delivery yesterday, which included the latest issue of Doctor Who. I've been very impressed with the writing in IDW's Doctor Who comics. Even without the official executive producer stamp of approval that the Buffy universe of comics have, these books really manage to seem like stories that could be episodes of the BBC television series, and they have a really great skill of having dialogue within the word balloons that sound like they could be coming right out of the actor / characters live-action mouths.

The latest story arc is written by Brandon Seifert, whose previous work includes Clive Barker's Hellraiser comics and his own creation at Image Comics, Witch Doctor. The art looks great, embracing the comic book medium instead of going for a painted / traced / bad photo realism style (that was made use of so horribly in the well written but horrible looking Doctor Who / Star Trek: The Next Generation crossover, also from IDW). The artist on this arc is indie vetran Philip Bond, whose previous work includes Vinanarama, Hellblazer and Tank Girl.

If you were ever curious as to how Doctor Who helped in the creation of James Bond, look no further than this comic.
Posted by batturtle at 6:06 PM