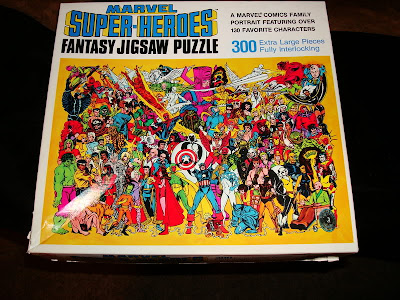 Sometimes when tidying, organizing and making your way through old basement stored boxes, you luck out and stumble on a little bit of treasure. I've been trying to clean up a tiny bit of my mum's scary Blair Witch basement and take care of some boxes that I've had stored down there forever and a day.

I retrieved a couple of my dad's boxes of stuff, he passed away years ago, and going through stuff like this kind of gets left behind a pushed into a corner 'cause it's often not the most fun chore to undertake. Besides for a baby picture and old drawings, there were also some completely hilarious school journal writings that I did in early grade school. I'm pretty sure if I took one of these books and just stood in front of an audience doing stand-up at a comedy club it would be pure comedic gold.

A very cool piece of treasure that I found was a puzzle with seemingly all the Marvel Comics characters from the early 1980's. I would hazard a guess that it belonged to me, but I have no recollection of ever having seen it before. Despite being quite the comic book aficionado, even I don't recognize everybody crowded together on it. Can you check-list them off any better than I was able to? You can cheat and find the back of the box online that lists everyone in the puzzle, ranging from obvious super-hero's the like of Spidey and Captain America to the slightly more cult icon's like Man Thing and Jack of Hearts. And if you know who Makkari, Charlie 27 or Martinex are, I tip my geeky hat to you.
Posted by batturtle at 5:35 PM