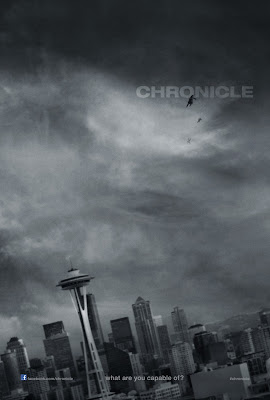 I was sceptical about the teen found footage movie Chronicle, especially having unfortunate experience of watching Project X, the previous teen-themed and completely horrible motion picture. I was pleasantly surprised by the low-budget taping of a $12 million budget sci-fi tale, not only did it fare well at playing by the found footage rules, it also showcased a smart script and some fine performances from the young unknown cast. It has fared well for the director and the films star, they're new respective gigs are directing the Fantastic Four reboot and starring as Harry Osborn in the next Spidey. Chronicle is an impressive feature directorial début from Josh Trank, a modern take on the birth of a villain and a hero, and a very impressive non-comic book based comic book like tale exploring the age-old rule that with great power comes great responsibility.
Posted by batturtle at 4:16 PM