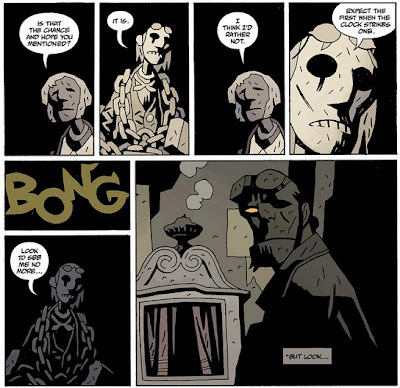 Hellboy in Hell #1 resurrects both Mike Mignola's return to drawing comic books, and continues the decades deep chronology of tales for his legendary cigar smoking hell-born hero. Though Mignola was never far from his most identifiable creation, co-writing many a Hellboy and BPRD (Bureau of Paranormal Research and Defence) script, and supplying many a cover. It also isn't really a resurrection of Hellboy, since the character is actually still dead and stuck in hell.

Mike Mignola makes the most of his comic book story-telling and tells amazingly fun, complicated, heart-wrenching, scary, enthralling tales within them. He is never guilty of phoning it in, you'll never find 22 pages in a row where nothing happens. Mike Mignola does the history of comic books proud, and I hope he keeps it up for many a year to come. Just the face that I have a newly published comic book in my possession that says 'story and art by Mike Mignola' makes me very happy.

As an added bonus, in this initial chapter of our hero's trek through hell, he has a run in with some Christmas Carol mythology in the form of some creepy puppets (Christmas Carol is my favourite book).

If I could only read one set of comics for the rest of my life, I'm fairly confident that I would pick Mike Mignola's Hellboy stuff. I love a comic book that look like a comic book. I am not a big fan of artists who strive for photo-realism in their comic book pages, and I don't like once fantastical epics that are now filled with pages of talking heads. If it's a non-fiction or autobiographical thing...no problem, no need for explosions. If the story is filled with larger than life characters and super-hero's and potential for action and adventure and horror and awesome...do something! Comic books at their best can be better than any tremendously expensive Hollywood blockbuster, and within their pages you can do anything! It's much cheaper to get an artist to draw whatever you can imagine vs spending a bazillion dollars on cg.

If you've never read any Hellboy, go do so. You can go back to square one (the first collection is called Seed of Destruction), or pick up Hellboy in Hell #1 without being all that confused. It's pretty much all awesome.