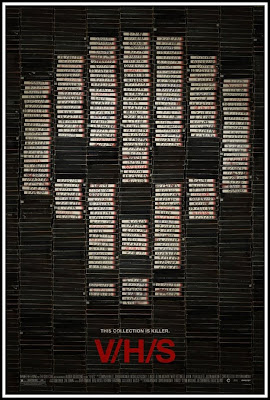 Saw V/H/S tonight, and am happy to report that it scared the hell out of me. The anthology offerings come flying out the gate with the first chapter, Amateur Night. The only flaw in doing so is that they may have put the best and most frightening tale first...all the other chapters had a hard time to compare keeping up to the style and terrifying aspects of a story of three jerks who have their night turn for the worst after bringing a strange girl they meet in a bar back to a hotel room. Hannah Fierman portrays the aforementioned strange girl, and she steals not only this portion of the anthology, but easily runs away as the character to remember in the whole film. Her skills in the role had me so freaked out that I could barely keep my eyes on the screen, a truly impressive and hopefully a breakthrough performance.

The other episodes pay tribute to a wide variety of the horror cannon, ranging from slasher with a Natural Born Killers twist, a Jason Voorhees style monster in the woods, and a haunted apartment viewed through Skype. The film does close strong as well, with an unfortunate turn for a group of guys who go to the wrong address on Halloween and end up at an actual haunted house.

Anthologies always have their ups and downs, and usually have stories within them that you like better than others. I was impressed with with both the gimmick of V/H/S, and the talent the filmmakers displayed in putting it all together. I look forward to the the V/H/S sequel, and think that is has much higher potential for continued interesting scary storytelling than your Friday the 13th's and Saw's and such.

You've got one more chance to be scared by V/H/S at the Mayfair, Tuesday December 4th at 9:15pm. It will forever change your thoughts on the outcome of a girl telling you that she likes you.
Posted by batturtle at 11:57 PM