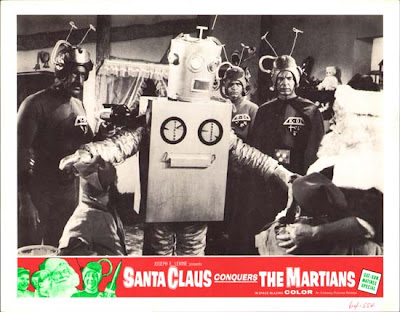 Hey, check it out...the world didn't end! I was fairly confident that nothing was actually going to happen, as it didn't happen all those other times in recent history when some crazy people let us all know that the end was nigh on some specific time and date. Have to admit though that there's always a tiny little amazingly minuscule part in the back of my mind that thinks it might be cool to witness an apocalypse. Not a wise thought, but I guess it's the same mindset that makes geeks think that a zombie outbreak or giant monster attack would be fun times.

Anyhow, since we are all still alive, what better way to celebrate than getting out of the house and partaking in one of the worst movies ever made? Santa Claus Conquers the Martians is impressively awful in staggering and unbelievable levels of writing, production and performance. It is also laugh out loud funny from beginning to end, though always for unintentional reasons, seeing as I'm pretty sure that everyone involved thought they were making actual sci-fi and didn't intend for bargain basement camp cinema.

Amongst other accomplishments, Santa Claus Conquers the Martians has the most amazing (and by amazing I mean awesomely terrible) robot and polar bear, and a mesmerizing theme song that will play over and over again all Holiday season long.

Santa Claus Conquers the Martians (and not to play spoiler, but he never exactly conquers anybody) yuletides its way onto the Mayfair screen tonight at 11:30pm. PS - Another Christmas miracle, as tonight marks the unveiling of our fancy new digital projector...never has such a bad movie looked so good!
Posted by batturtle at 11:18 AM