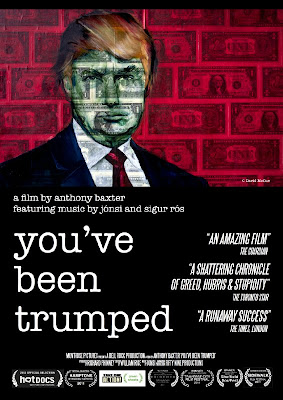 As I've recently mentioned, I think that documentary filmmaking has had an incredible run of excellent releases the last few years. The only unfortunate turn, is that often these impressive cinematic offerings leave one feeling that the end is nigh to do environmental or political travesties. Failing that, if you don't feel like giving up on our planet, you might at least feel immensely angered at the state of humanity and the powerful people ruling our world.

If you didn't have a distaste for billionaire business magnate and trashy reality TV host Donald Trump before, You've Been Trumped will most certainly leave you angered. This new documentary focuses on the bold faced lies and inhumanity that Trump spear-heads in his quest to destroy cherished lands in Scotland to build a gaudy tourist gold course. Witnessing his horrible diatribe and villainous actions taken against these lovely small town folks, who he wants to displace, makes you wonder if he is full blown insane or just evil. It's cliché to think this of a person, but you can't help but wonder how Trump can look himself in the mirror every morning.

None the less, even though it will make you want to hop a plane to the nearest Trump Tower and throw a punch, this is a brave and immensely interesting doc that although not exactly the feel good hit of the year, it is very well worth your movie viewing time.

You've Been Trumped screens at the Mayfair tonight and tomorrow, Dec 12 and 13, at 7:00pm.