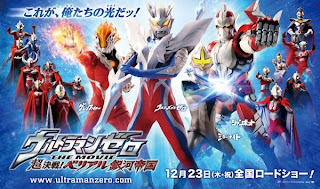 Wrapped up our visit to Fantasia in style with a matinee screening of Ultraman Zero: The Revenge of Belail. This Ultraman film marks the 45th anniversary of the franchise, which at this point comprises of 28 seasons of teevee and 22 films. Nothing quite better then the simple enjoyment of a movie filled with giant robot heroes fighting giant monster villains. Plus there was a part where a guy was crying, then a giant robot flew out of his tear, and then they fought bad guys. I didn't have a grasp at exactly was going on at all times, whether that be from a cultural divide or just because of poor film-making I'm not quite sure, but that did not hinder the enjoyment of this rather insane corner of Japanese cinematic history.