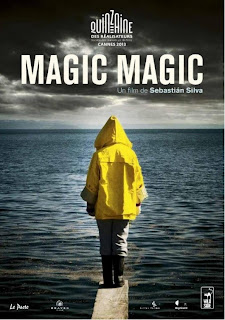 I listen to the Judge John Hodgman podcast on a regular basis, and enjoy it very much. The premise of the show is that people bring a case before the fake Judge, and he uses all of his comedic wisdom to rule as to which side of the debate is correct. One of the mainstays of the court is that you can't force someone to like something that thy do not like. It stuns me how many times couples and friends and family members seem to want to force their taste in movies onto one another (either via podcast debate or in real life examples I've been told of). I never get why when two people are going to watch something, both can't be pleased with how they are spending their time. Especially in this day and age where the world is at your fingertips and it's pretty easy to have a wide selection of entertainment options.

So, when my girlfriend and I are at the Fantasia Film Fest, I give her full warning that sometimes they program some pretty insane stuff. She's not exactly the biggest horror fan in the world. When she saw The Blair Witch Project for the first time, a couple Halloween's ago at the Mayfair, she nearly broke my arm from grabbing it in a state of fright. If she didn't want to join me for a potentially disturbing and terrifying cinematic experience, I would totally understand.

She cowboy'd up though, and bravely decided to join me for the Korean anthology that was simply titled Horror Stories. I texted this info to a friend of ours who I attended many a Fantasia screening in the past. He said that it was nice to have known her before her brain was forever damaged by exposure to the genre at hand. Luckily she got off the hook relatively easily. There was the traditional Korean scary ghost ladies, and some zombies and serial killers...but in comparison to other films I've seen from the country, it was rather tame.

Next up genres switched over to a Spanish drama Magic Magic, featuring Juno Temple and Michael Cera. On the surface it begins as a simple story of a young woman travelling from America to visit her cousin in Chile. Things start getting uncomfortable right away thanks to our central character's cousin abandoning her to weird friends as they make their way to a secluded cottage. Things continue to delve into hypnotism and nightmares and confusion and a general descent in madness. Not quite a horror film, but none the less it had lots of scary moments and a well played horrifying climax.

The biggest surprise of the night was the Imperial Theatre. Everyone always teases me that we should open up a Mayfair in Montreal. Evidently there already is one there, it just goes unused most of the time. It holds some 900 seats, has a chandelier and is covered in fancy design never changed from the 1920's. Sad that it sits sadly empty most the time, but nice to see so many movie fans getting to partake in its glory during the festival.
Posted by batturtle at 11:24 PM