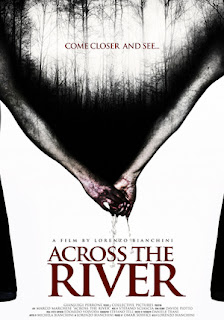 We're sticking around in Montreal an extra few days to good deed it up and take care of some dog and cat sitting duties. Most importantly, that mans I get to take in a few more Fantasia screenings.

First up was the Japanese horror film The Complex, from the director of The Ring inspiration Ringu. Like many films from this corner of the horror genre, it involved a haunted house story-line and creepy kids. The movie was ok, I've just seen this kind of thing over and over again, so it felt a bit like covered ground and had nothing new or original about it.

Across the River on the other hand was a horror movie at it's best. If you went into the movie blind, you might think it was going to be a simple character piece about an ecologist working in the woods. Then there's some creepy sounds from the surrounding forest...then the leftovers of a dead boar are found...and then things get really scary. There are great shots of wild animals being spooked by the aforementioned creepy sounds, made for great cinema, but I think might qualify as animal cruelty. Once the climax starts rolling, I spent the whole time wide eyed with hands gripping my seat. My girlfriend spent most of the time with her eyes closed. This for a low budget project with little in the way of dialog, no real special effects, and the performance of a single actor carrying most of the connection the audience has to the movie. Some don't enjoy or understand why people like horror movies. It's movies like Across the River that I point to for the legitimacy of horror film-making, and how they can be some of the most impressive examples of a piece of work entertaining and effecting its audience. It will also make you want to avoid camping for a while.