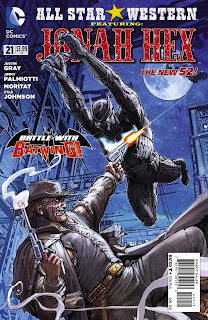 I'm always behind on my reading, so a few weeks late I will recommend All Star Western featuring Jonah Hex #21. Time travelling super-hero Booster Gold (another of my pre-New 52 favourite characters) was an unexpected guest star in the western comic in the past couple issues. Fantastical tales are nothing new to the character or world of Jonah Hex. Sometimes his stories are straight guns a blazing westerns, but he has bumped into vampires and ghosts and masked men along his travels. He has even traveled to a post-apocalyptic future in the 1980's series Hex.

This issue brings this incarnation of Jonah into present day for the first time. He lands in Gotham City and has a run in with one of the Batman Incorporated soldiers, Bat Wing. I admit that I loved the simplicity of the previous run of Jonah Hex tales a bit more then these ones. They had this great run of one issue stories featuring a rotating talent base of artists. The same writers are on board for this New 52 version of the character, which takes a more of an ongoing issue to issue continuity story-line to use. Some might not appreciate their favourite bounty hunter being removed from the past and being placed him into the centre of the DC Universe present day prime. I look at it the same way as I do with all the things that make comic geeks angry when there's a major change. These characters are really old, these characters have appeared in hundreds of comics, to keep things interesting you have to toss curveballs at these characters. It doesn't always work, but it often makes for interesting and fun new stories. Especially in mainstream comics, fun seems to be the one thing that is often missing. And just like Superman's death, Batman's broken back and Wolverine's lack of adamantium...I'm sure everything will be back to normal and Jonah will be back in the wild west before you know it. Don't fear change. Read comics.
Posted by batturtle at 4:00 PM