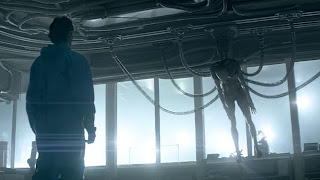 I didn't get my copy of Deadpool #1 signed by it's co-writer, but it was none-the-less great to see Comedians of Comedy alum Brian Posehn perform tonight at Just for Laughs. I've been a fan of his for a very long time, from News Radio through Mission Hill through the Sarah Silverman Program. He was waring a Warriors shirt and topped off the show with a Star Wars rant. Not hard to guess that his comedy stylings are in my wheel-house of interest and enjoyment.

After that we bolted over to the Fantasia Fest to get in line for the sold out screening of The Machine. Luckily our industry badges afforded us entry anyhow...there's no money in owning an indie rep theatre, but you at least get to see a lot of free movies. I especially love getting to see awesome movies that you can't see anywhere else yet. The Machine was very impressive Blade Runner-esque sci-fi about evil corporations, obsessed scientists and the birth of cyborgs and artificial intelligence. It is another example of a low budget movie getting it right, and expertly so, in a genre that the mainstream so often drops the ball on. The filmmakers are still chasing distribution, but keep the title on your radar. Hopefully it will find a distribution home and we can grab it to screen at the Mayfair sometime soon. It cost about 200 times less then a Transformers movie, and was easily 200 times better then anything Michael Bay has ever been a part of.
Posted by batturtle at 11:32 PM