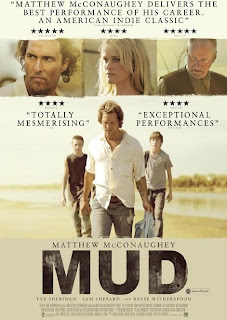 It's always hard for me to pick favourites or make best of lists, having said that, I'm pretty sure the movie that I would deem best of 2011 was Take Shelter. Writer and director Jeff Nichols is back with Mud, starring Mathew McConaughey in the title role. The movie is about two adventurous and independent boys in Arkansas who form a friendship with a mysterious fugitive in a Huck Finn reminiscent style. I was just as impressed with this effort as I was with Take Shelter, and most critics seem to agree with me that a truck full of awards will soon be coming the films way. I think that this Jeff Nichols is the real deal and a filmmaker with a ton of talent. And yes, most importantly, as per contractually obliged by his rider, McConauhey does indeed go shirtless for a portion of the film.