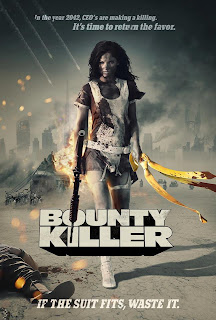 Tonight at Fantasia we watched Bounty Killer, a really impressive low budget mash-up genre of an indie movie. Things opens up with an insanely violent guns a blazing action scene, and the pace doesn't let up for the 90 minutes that follow. The world of Bounty Killer is part comic book, part video game, part exploitation, part grindhouse, and all post apocalyptic crowd pleasing action and excitement. It always amazes me how much better low budget genre efforts are than similar big budget movies of a similar style.

Making the evening even more enjoyable, we followed up a very fun movie by attending Just for Laughs for a dose of Maria Bamford stand-up. Maria's mix of dark autobiographical stories, mocking of her family members and wide ranging impersonation talents make her one of the best stand-up's working today. We sat front row and got some interaction into her performance. Which I think means that we are now a part of show business. If you haven't seen the documentary Comdians of Comedy (which is on the Netflix), go watch that as a good jumping on point to her hilarity.
Posted by batturtle at 11:51 PM