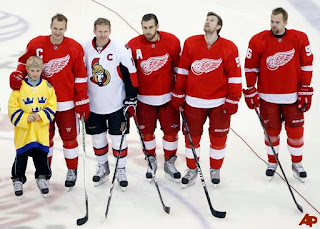 Hmm...maybe today's big hockey news shouldn't have been that much of a surprise considering the above photographic evidence of Alfie's connection to the Detroit organization.

I haven't rally been a true hockey fan for what seems like quite sometime now. It's not due to bandwagon jumping because the team for my home city hasn't won a championship, or because in recent years they've gone from contenders to an organization the misses the playoffs or fights to get in to post season contention each year. I was loyal enough that stats didn't really matter to me. I remained a Gretzky fan right through St Louis and to the farewell tour in New York that didn't go quite as well as everyone thought they might.

No...I guess I just found myself too busy for hockey. I would still go to games if free tickets fell in my lap (which happens every so often), and I have a birthday tradition with my uncle that continues, but otherwise I am very much out of the loop as to the ins and outs of the game. Whether that was that I became intertwined in the much more awesome sport of roller derby, or just because my nights became much more packed with going to movies at the Mayfair all the time. The more I hear non-sports fan comedians who I listen to (the like of John Hodgman or Chris Hardwick) poke fun at sports, the more I realized that I just couldn't raise up the spirits to care about them all that much anymore.

I was on my way to the vet for a quick check-up for the puppy thismorning when my friend told me the news. I was shockingly saddened and in a short state of disbelief considering that I haven't really followed hockey in four seasons or so. Alfie jumping ship to Detroit still kind of took me aback and made me loose my faith in the universe a lil bit. To be fair, Alfie really did nothing wrong. His contract was up, he's not breaking any rules or throwing fits or acting in any kind of underhanded manner (which athletes often partake in). I would have bet it all that he would have spent his whole career in Ottawa though. Now, instead of a noble and unprecedented run with a single team, he's off to try and get his name on a Stanley Cup in Detroit. Cheering for millionaires playing a children's game just doesn't seem all that appealing to me anymore. With the abandonment of my one time beloved captain, I do think this means that I officially don't care about hockey at all anymore.
Posted by batturtle at 2:18 PM