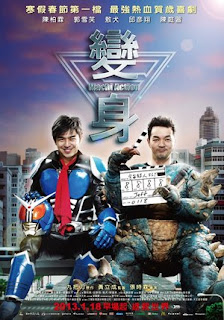 Bushido Man is a no-budget martial arts food themed action comedy. It was extra impressive because it was a genuine no-budget endeavor, in which the director in attendance said that often the crew consisted of just the actors along with the director running a camera. The movie was filled with lots of great action, including quite a few original fight gags and stunts that I've never seen before. It also had one of the best after-the-credits twists that I've ever seen. As an extra bonus, a couple of the actors were on hand for some live martial arts action after the film. Maybe the best part in an over-all greatly memorable screening was that they gave out Japanese candy to the crowd. I'm not quite sure what is in the package titled Corn Potage, but it's mascot and packaging awesomely enough look like something right out of a Simpsons parody of Japanese culture.

Machi Action was another real crowd pleaser, and although heavily intertwined in geek culture, I think would be equally enjoyable to patrons of the cinema who don't normally enjoy giant monsters in their entertainment. Machi Action is a behind the scenes tale of the star of a once greatly popular but now dwindling Saturday morning live-action series the like of Power Rangers. The story of best friends who play a iant space hero and the giant monsters who he battles was funny through-out and had a lot of heart. It was so good that I'm sure that sooner or later Hollywood will remake it instead of just releasing it in its original form.