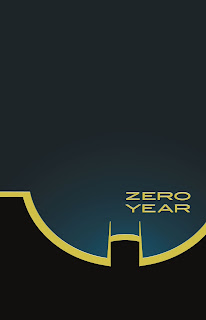 The flagship Batman title as written by Scott Snyder and drawn by Greg Capullo is delving into an extended flashback territory. The latest story-arc takes things out of the current time-line, and zaps happenings back to the building block days of Bruce Wayne dressing up like a bat and dispensing vigilante justice to the people of Gotham City.

The corner-stone Bat book has been on a great run since it's re-numbering, and the first issue of Year Zero (in Batman #21) gets the always tricky prequelizing of a franchise off to a great start. The DC Comics relaunch into the New 52 universe has taken some flack from critics and fans, some of the criticism deserved. The reboot has been far from a train-wreck though, with Batman being one of their many worthwhile comics on the shelves worth a look. The best thing about stuff like Year Zero, is that it sets things a bit outside of always jumbled continuity cross-overs, so you don't have to worry about having to be knowledgeable of the dozen other Bat-books to know what the hell is going on.
Posted by batturtle at 4:03 PM