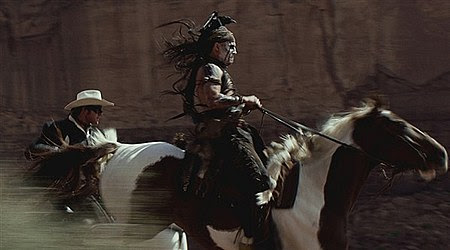 Got to see an advanced sneak preview of Th Lone Ranger tonight, the retelling of the classic character from a modern day Hollywood blockbuster Disney perspective (in case you haven't heard of the movie). I like westerns, Johnny Depp and director Gore Verbinski, so on the surface this is a movie that is seemingly right up my alley. One can't help but have a little bit of hesitation at the thought of Johnny Depp taking on a Native American side-kick character in a wild west movie.

It brings up an interesting debate and line of questions...to which I do not know the answer. Is it wrong for Johnny Depp to play Tonto? Is this the equivalent to the uncomfortable portrayal of Orson Welles in blackface in his take on Othello? Is it wrong for Tom Hanks to play a gay man in Philadelphia since he is straight? Is it wrong for Phil LeMarr to play the Japanese character in the animated series Samurai Jack because he is African American? Is Cate Blanchett allowed to play Bob Dylan in I'm Not There even though she is a different gender then the real life character she is portraying? This is a genuine series of pondering running through my brain due to Johnny taking on the role of Tonto instead of The Lone Ranger (which was supposedly the initial idea).

I really enjoyed The Lone Ranger. It was paced and packed with all kinds of quick slapstick levels of action and adventure, featured some fine performances, a great score from Hans Zimmer, and yes...I thought Johnny Depp was pretty great. Sure, he happens to be a giant movie star thanks to the unexpected success of Pirates of the Caribbean a decade ago, but he is also extremely talented at what he does. Like most mainstream blockbuster type films now-a-days, the movie is much too long, but otherwise a lot of fun. I hope that my enjoyment of the western does not make me a racist.