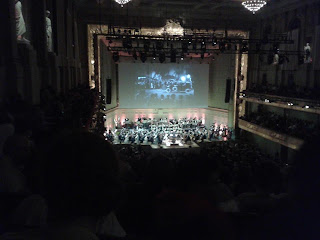 It was a rain soaked day in the city of Boston. We braved the bad weather in between sprints between the dry safety of public transit and museums. It was an overwhelming day of history, science and culture as we hit not one but three museums around the city. We saw dinosaurs, we saw great pieces of art, we saw a big Tesla coil that could play Darth Vader's march with lightning Sith like bolts of electricity.

Speaking of Star Wars music...we partook in the instigation of the trip and capped off our day by attending the Boston Symphony Orchestra again, this time conducted by John Williams. Mr Williams is a lovely, humble, quiet spoken gentleman with a clear love of his motion picture orchestration career. I figured that I would get choked up at some point in the evening, and it hit as soon as he walked out onto the stage. He has written many of the greatest movie scores of all time after all, including all of those Star Wars movies that I love so much.

It was an interesting selection of musical choices, including Hook, TinTin, Lincoln and a selection from a pre-Jaws fame tevee series called The Cowboys. The highlight amongst a program of highlights was when they screened the River Phoenix young Indy scene from The Last Crusade, without a musical score. Mr Williams did a commentary over the clip, explaining how he might take notes or discuss what was needed with Spielberg. Then he and his orchestra played the full score over the re-played scene. If I learned one thing tonight, it's that Boston loves John Williams. I don't think I've ever been part of such an enormous introductory or end of night ovation for a performer. It squarely falls under once in a lifetime experience for sure. And yes, he did confirm that he is getting ready to compose some new Star Wars music.
Posted by batturtle at 11:18 PM