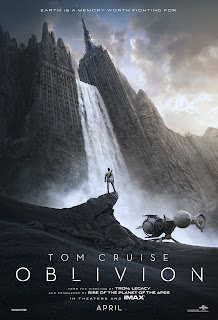 I've said it before and I'll say it again...I don't care about Tom Cruise's personal life or religious believes or thoughts on medication or marital status or height. I don't care about any of those things. All that I can tell you for sure is that he is consistently in movies that I like and has been for a very long time. I appreciate that he's a super-star who isn't afraid to do a supporting part (Magnolia), a cameo (Tropic Thunder), heavy drama (Born on the Fourth of July), play the bad guy (Collateral), and his one ongoing franchise (Mission: Impossible) keeps getting better & better.

The latest in a long line of good Tom Cruise movies screens tonight at the Mayfair. Oblivion, the post-apocalyptic sci-fi epic from the director of Tron: Legacy, producer of Rise of the Planet of the Apes, & co-starring Morgan Freeman, screens tonight at 9:30pm.
Posted by batturtle at 9:31 AM